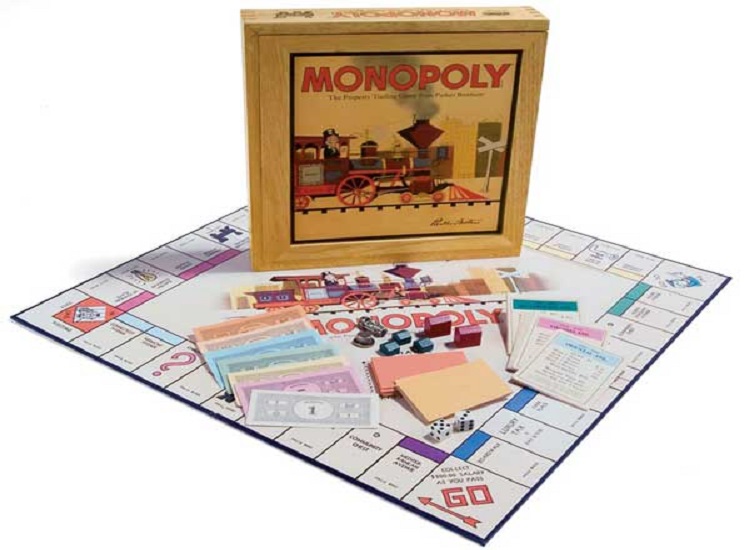 As I looked over a family album from days past, I began to miss the latest games I played as a kid so I was excited beyond belief to find out there was an easily accessible version of Monopoly that I could play and relive past memories long since gone.  That is when I came across Monopoly Here & Now Edition on Legacy Games.

This game starts out with a lively start menu with Monopoly money being thrown by the Monopoly guy as he pops out at your screen. With this first sight, you are also introduced to some bouncy background music that fits the feels and style of any Monopoly game whether you are by yourself or with your whole family. First, the player must type out the name they want to be the game.

You get to choose what Monopoly piece you want to play with and there are a total of 8 to choose from.  A car, an airplane, a box of French fries (cause when you think the money you think McDonald’s), a coffee mug, a cell phone (no a tumor does not come with it), a shoe (cause everybody wants to be the one actually able to kick some butt), and a puppy (couldn’t ask for a bigger bull’s eye than a puppy in Monopoly.)

After you choose things as you see fit with your very own piece and name in the game it is time to roll the dice. Yes, you really do have to click on the roll the dice button and see and hear the dice rolling and stopping on the virtual game board.

This game follows the rules very well and it is quite easy and fun to follow whether you are auctioning for a piece of property, building houses on some property, or just going straight to jail, where a paddy wagon picks you up and drives you over to jail with a sad picture of the Monopoly man behind bars.

The one thing this game has over the real-life version is that you can play by yourself and go against the computer. This version of the game is quite updated as well with modern cards such as “Make a donation to Disaster Relief Foundation.

Overall, this is a great game and not just some way to kill time. If I love Monopoly or even just liked it as a kid, I highly recommend this game. I would give it four thumbs up but since I only have two, I will have to give it two thumbs up and two big toes up as well.

The Turtle Odyssey 2 My Personal Odyssey Too Game is…