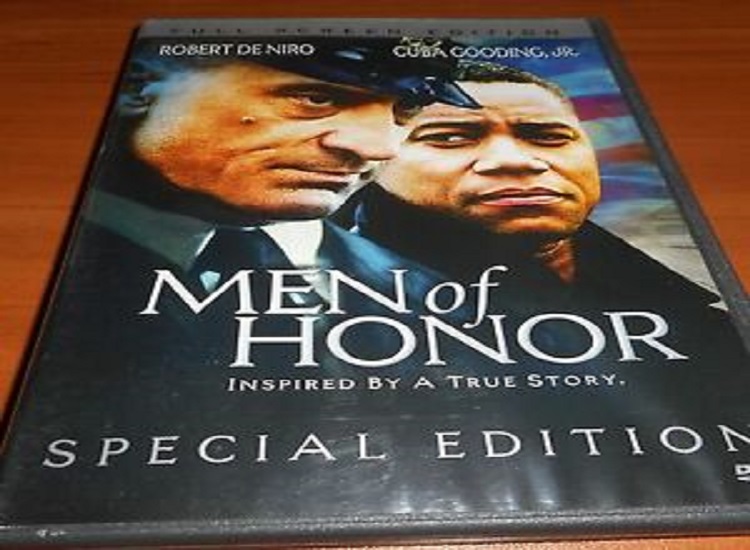 The plot of this exceptionally inspirational movie is inspired by a true story.

In the fifties, Afro-American Carl Brashear (acted by Cuba Gooding Jr.) promises his father he will enter the U.S. Navy. He soon discovers that due to the color of his skin, any possibility of enrolment is limited to that of being either a cook or as a steward. Yet Carl does not give up.

After waiting for two years and sending hundreds of letters, he finally is accepted to enter the diving unit. Carl has to face the hostility of a tough military environment, however, within the hostility manages at times to breach the wall of prejudice and form bonds of friendship.

The most significant of these friends is Carl’s diver instructor, Billy Sunday, who in the beginning does everything to make ‘the student’ desist from his career purpose, making his life always difficult. Billy, interpreted by a very ‘powerful’ and ‘pungent’ Robert De Nero, is presented in nature as a controversial character.

He has problems with alcohol as well as with his wife; he used to be a racist, but then regretted, he is the one who shows loyalty to his comrade when help is most needed, ready even to give up his own career.

The time to help comes after a dramatic accident, which leaves Carl seriously injured, with one leg amputated. As a consequence, Carl has to face the possibility of early retirement from the Navy. Carl decides to fight back, ready to shows to his superiors that the recent handicap won’t prevent him to accomplish his duties as a diver.

Billy helps him with physical and mental preparation. His case is discussed in front of a military court and Carl wins the legal proceeding, with Billy at his side to struggle against the bureaucracy. As the first amputee in full service in the history of the United States Navy, he will be able to stay on duty for nine more years.

The movie can be classified as the typical, maybe a bit old fashion American Hollywood style

The story, where many conflicts are represented, with several moments when then tension upraises, but in the end, the message is: ‘’if you endure you will win’’ and all the feelings will be healthy and peaceful.

However, I believe that the biographies of men that can be taken as a model could be always inspiring.

Furthermore, the film has the merit to give some information about the military and Afro American history, not easy to find in history books and not well known by the public, but also not less interesting than some major events.

Such an effective response in the audience can possibly be accredited to the duo Gooding-De Nero a pair all but taken expected. The perpetuating interior struggles of both characters mixed with De Niro’s imposing charismatic acting render this a really pleasant watch.